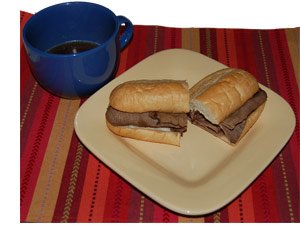 Okay, it’s a week night. You just spent an hour in rush hour traffic. You want a simple, easy meal, that’s ready in a jiffy. Our recommendation would be a French Dip Sandwich made with McCormick Au Jus mix. Of course, you’d need to have 3 items on hand: Au Jus gravy mix, sandwich rolls, and sliced beef.

The French Dip Sandwich was created in the 1920’s in Los Angeles, California when a roll was accidently dropped in to the Au Jus gravy. The customer said it didn’t matter, and took the sandwich anyway. The next day they came back and asked for the same sandwich and thus was born an American classic sandwich.

This is a recipe for French Dip Sandwiches that we’ve been making for ages. As we said in the lead paragraph, it’s really a great recipe for a busy week night. That’s because it’s easy to make, and tastes great.