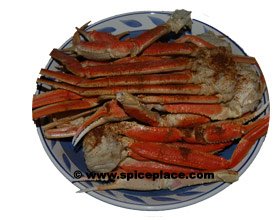 Having lived in the Mid-Atlantic region of the US for most of my life, the natural seasoning that comes to my mind for seafood is Old Bay Seasoning. Old Bay is a classic seasoning for Maryland Blue Crabs, Shrimp, and Crawfish. With all of those shelled seafoods that are eaten by hand, you’ll find that the Old Bay is sprinkled on the outside of the seafood. And since there is a shell on the seafood, the seasoning doesn’t get into the meat. So for the seasoning to work, what happens is that the flavor of Old Bay gets into the food by being transferred from outside of the shell to the meat by the hands as the food is eaten. It’s a little messy, but quite tasty too!

One of our favorite seafoods is Snow Crab. The Snow Crab meat has a nice flavor and unlike Blue Crabs, there isn’t too much labor involved in eating the Snow Crab meat. While the Maryland Blue Crab has an aura around these parts, and Crab Feasts are blue crab. Snow Crab has been steadily making it’s way into Maryland Crab Houses and probably for the two reasons just listed, they taste good, and are easy to eat. Since Snow Crab is also already cleaned and cooked, all you really need to do to make them is to heat them up and season.

Adapting Snow Crab to Maryland Style Seafood cooking is quite easy to do and here’s how:

Serve Snow Crabs with the butter dipping sauce and with Baked Potato and Corn on the Cob. 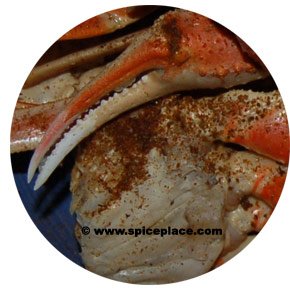 In case you’re wondering about just how much Old Bay Seasoning you need to put on the Snow Crabs, here’s a picture of the proper amount. This isn’t science, so you can use more or less. But if you use too much, it’s a little more messy then using the right amount. If you happen to use too little, simply sprinkle more over top of the Snow Crab legs. Serve with plenty of paper napkins or toweling as the Old Bay will spread to your hands — but that’s the point and is how the seasoning will get to the seafood, transferring from your hands to the seafood.