Use as stirer in coffee, teas and other hot drinks. 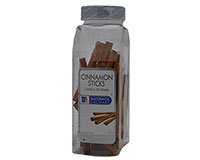 McCormick Cinnamon Sticks come from the bark of a small tropical evergreen tree native to the tropics including Southeast Asia, Sri Lanka, Java, Egypt, West Indies, Madagascar, and Brazil. The tree grows to a height of 30 to 45 feet.

Cinnamon Sticks are chunks of the dried back of the tropical evergreen tree Cinnamomum verum, while ground cinnamon is finely ground pieces of Cinnamon Stick. Cinnamon bark itself is harvested from 2 year old sprouts of the tree. The bark is stripped from sprouts, and upon drying the bark curls into rolls... [Read more about Cinnamon Sticks]

This is a large container of McCormick Cinnamon Sticks. It's packaged in bulk PET plastic container.