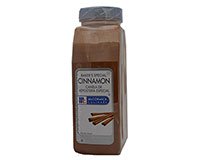 McCormick Ground Cinnamon, Bakers Special is a very fine grind of cinnamon for professional chefs. The texture of this ground cinnamon is almost as fine as flour.

Cinnamon has a characteristic woody, musty, and earthy flavor and aroma. It is warming to taste. Volatile oil content is the main difference in the various Cinnamons offered. The finer the grind, the more quickly the Cinnamon is perceived by the taste buds. Cinnamon spice is the dried, inner bark of evergreen trees belonging to the genus Cinnamomum. The Cinnamon sold in the United States is Cinnamomum burmannii.