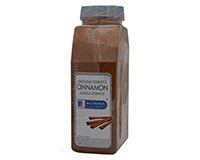 McCormick Cinnamon Ground Korintji has a characteristic woody, musty, and earthy flavor and aroma. Cinnamon is warming to taste. The Volatile oil content is the main difference in the various Cinnamons offered. The finer the grind of the Cinnamon, the more quickly the Cinnamon is perceived by the taste buds.

Indonesian cinnamon, also known as Korintji, has a delicate flavor — warm and sweet with a touch of spicy.

Indonesian cinnamon is what most Americans have enjoyed since childhood. This cinnamon comes from plants that grow prolifically in the mountain ranges of Western Sumatra. The name Korintji is actually the name of a famous mountain that still has cinnamon trees growing wild alongside newer, cultivated trees. Indonesia is the largest producer of cinnamon in the world today.