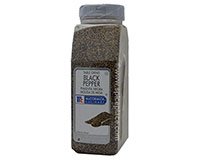 McCormick Black Pepper is made from the dried fruits of a tropical vine Piper nigrum. The same plant is used to produce white pepper too, although for white pepper the fruit is soaked in water to remove the outer dark husk from the pepper fruit. Black pepper is one of the oldest, and most commonly used seasonings. It's originally native to India and is now grown widely in tropical regions of the world such as Sumatra, Malaysia, and Indonesia.

Black pepper is commonly ground so that it can be distributed evenly over foods. The flavor comes from aromatic oils in the black pepper, so it's best to add pepper at the end of cooking so that the flavor doesn't evaporate during cooking.

This is a course grind of black pepper great with dry rubs on ribs and roasts, plus salads, and general use.

Table Grind McCormick Black Pepper is dustless so it always looks good in a pepper shaker.