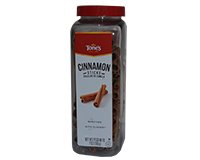 Use Tones Cinnamon Sticks as a stirer in coffee, teas and other hot drinks. Also used in asian soups, chili, and as a dessert topping... [Read more about Cinnamon Sticks]

These cinnamon sticks are packaged in a bulk PET plastic container.